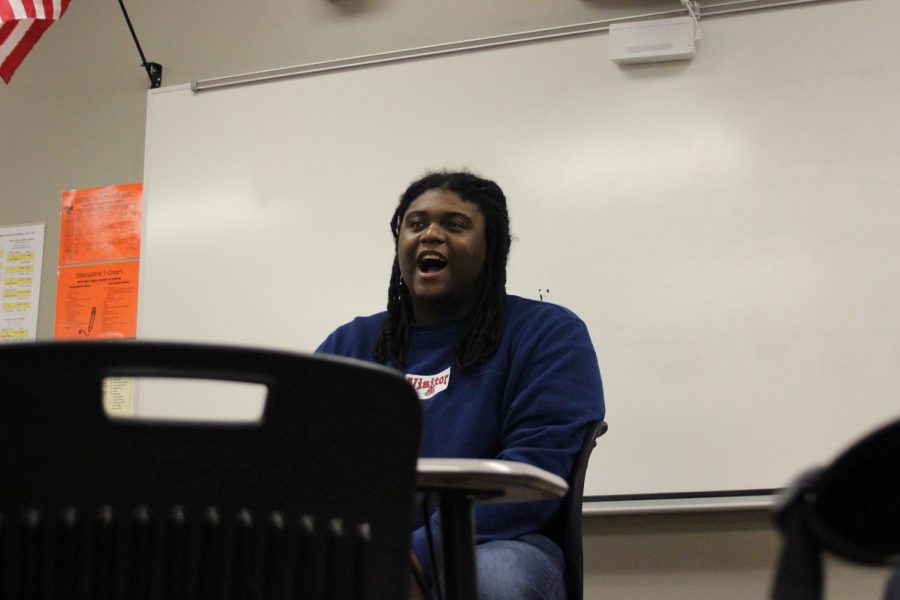 For the past five years Rollins has been discovering, writing, and shaping his book Myles Away.

Rollins encouraged students to spend time in their writing; explaining that the right words don’t come right away and there’s always room for error.

While Rollins has had an interest for writing since he was ten years old, Mr. Mays’s Creative Writing class further opened up his eyes to the possibilities.

“I took creative writing because I enjoy crafting stories for myself and others to escape into,” Rollins said.

Taking a creative writing class can sometimes be no more than another credit, but Rollins decided he wanted to take something away from the hour he spent in Building G at the old campus.

“Thankfully, I took the class, because it lead to me getting inspiration to write my first novel, Myles Away,” Rollins stated.

Finding a comfort level with and what style/ technique that works is something Rollins was very concentrated.

“I prefer writing my stories or poems on my phone over a computer. Texting has become a skill that I am very adept at,” Rollins stated.

While some may have taken a keyboarding class or two in their elementary or high school career, it can be a skill easily forgotten.

“ I never really had much skill with typing on a keyboard so it was an underdeveloped skill that easily slipped away,” Rollins explained.

The idea that a passion could one day be an occupation was one not thought of by Rollins until he had submitted a short story to the annual Brian Hodge Horror Story contest.

Rollins created a story based off of a young man who gets bitten by werewolves and “slips into its powerful influence,” Rollins said.

With doubt in his mind, his story placed him in the top five, and after the exciting news is when he received Mr. Mays’s feedback.

Rollins was told he could turn his short story in to a series and was given  hope as he began a new challenge in his life; one that would take five years to accomplish.

“The idea for Myles Away started with my horror story, “The Howling Hour”, and through Mr. Mays’s suggestion, I slowly turned it into, Myles Away as time went on,” Rollins explained.

Rollins believed that finding the way one works best is an extremely important part of becoming a better writer.

“You don’t have to follow all the rules they give for you,” Rollins stated, adding, “‘that’s how I wrote my book. Just go with the flow no structure no outline.”

Part of growing in one’s writing is maturing in oneself, or, as Rollins put it, reflecting.

“We all have different things to reflect into society, whatever I learn from here. [I] reflect it,” Rollins stated.