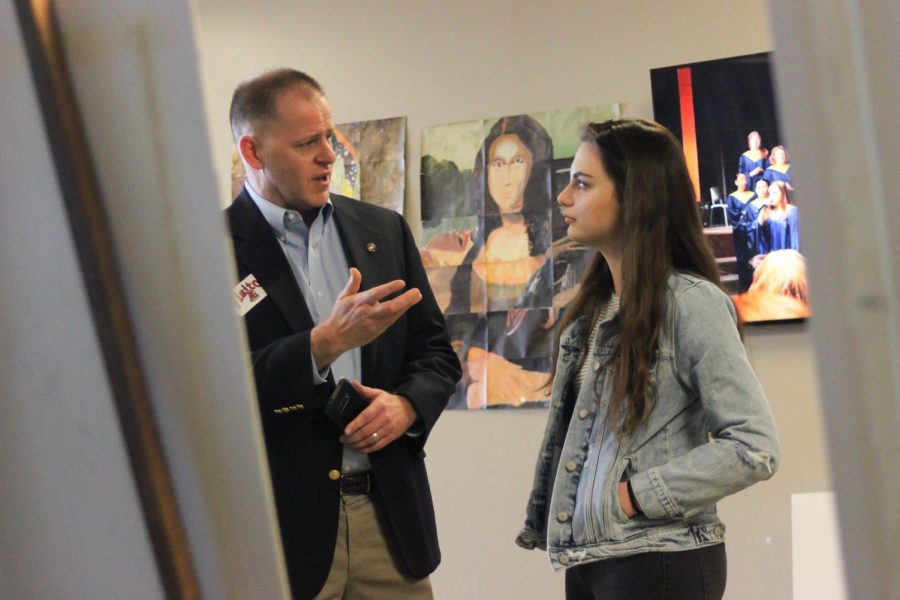 Senator Paul Schimpf, R-Waterloo, visited MV on March 18 to bring back two students art work he had hanging up in his office months prior, as well as tour the Art Department.

One of the students whose art senator Schimpf returned is MV Senior,  Chloe Flanigan.

Flanigan used this opportunity to show the senator how her art has transformed and evolved since he saw her work last.

“I wanted to know what he thought of my recent portfolio and get his opinion on it since he enjoyed some of my other art,” Flanigan stated.

Flanigan led Senator Schimpf to outside of the theater where she had six of the twelve pieces from her portfolio.

Flanigan created her portfolio based on representing specific experiences in her life as a child and early in high school.

In the hall in front of the theater were six of Flanigan’s paintings, each represented under the same category but each with different scenarios.

Looking at the paintings, Senator Schimpf was speechless. Not only had he appreciated her artwork prior, but he is now given a deeper understanding into the life of Chloe Flanigan.

Throughout her art, Flanigan is representing not just herself and her experiences, but a large majority of young females and males at MV everyday.

While observing her art, director of Cedarhurst, made the comment “This is not a high school students work, this is powerful stuff.”

That is the same response almost everyone who saw her work reacted.

Flanigan’s art is now creating a conversation; among students, teachers, senators, passersby, and anyone else who stumbles upon it.