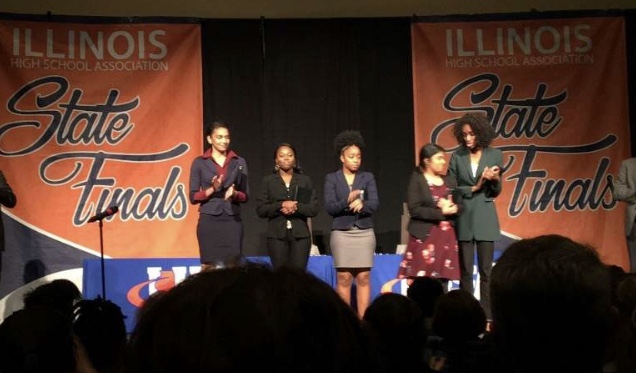 Omari Jackson, ‘21, had a successful Speech and Acting season with a concluding victory of ranking top 3 in the state of Illinois.

Jackson competed in various competitions in order to advance to the state level.

After regionals and sectionals, Jackson advanced to the state competition, which was held at the Peoria Civic Center in Peoria, Illinois.

In a wide range of options for Speech and Acting events, Jackson chose to compete in Poetry Reading.

“All together 19 people made it to state for poetry reading, and out of those 19 people I was 1 of 6 to make it to finals,” Jackson added.

As Jackson progressed through the state rounds, she was surprised at her advancements to the final round.

Upon competing in the state finals, Jackson placed third in poetry reading.

“When they called my name for 3rd place I was astounded. To think that I was ranked top three poetry speakers in the state was absolutely insane. I really felt like the work that I put in at the beginning of the season had paid off. I was very happy with where I place and I hope to place higher next year,” said Jackson.