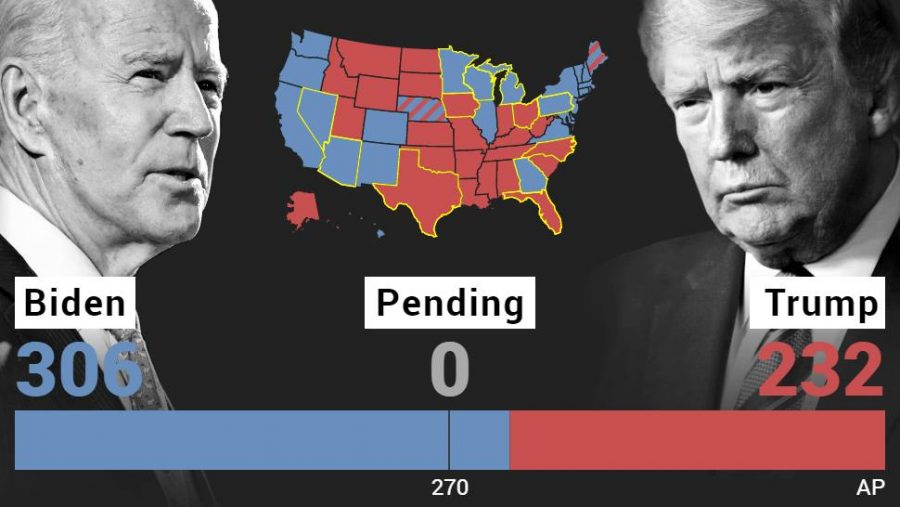 Among a pandemic and widespread economic calamity, the year 2020 also ushered forth a tumultuous political landscape in the U.S., with the country equally divided into two sides as a result.

MV students and staff recently experienced the shock and awe that was the federal election 2020.

Mr. Frank Hartman, longtime social studies teacher of 27 years, has seen how election day and surrounding events affect different generations of students and staff.  “People are frustrated, lonely, angry and confused by this pandemic.  It’s always easier to blame someone else.”

Mr. Hartman thinks as if the country has never been so polarized as a result of media favoritism.  “Leave out the political commentary and just report the facts. Stop making someone with a different viewpoint out to be the enemy. Virtually no conservatives are white supremacists and there are almost no Democrats that are socialists. There is too much name calling and no reliance on facts by both extremes.”

Mr. Hartman looks at bipartisanship as an issue that could be a result of a two-party system and other variables.

“In some ways, maybe. But I think that we have parties within the parties. In other words there are progressive Democrats and Moderate Democrats–for example AOC and Bernie Sanders are not the same as Joe Biden and Joe Manchin. There are Republicans like Rand Paul that are far more conservative than somebody like Mitt Romney,” Mr. Hartman stated.

The experienced educator hopes for the best in terms of healing the deep scars of political tension in this country.

“People need to look at the efforts of our three most recent presidents and their efforts to promote [the] Covid vaccine. Clinton, Bush and Obama are all working together to show leadership even though they have different political views on major issues. We need more moderates on both sides of the issue.  People need to look at the leadership of people like the late Senator John McCain,”  Mr. Hartman said.

The seasoned social studies teacher has already voted but will not share his decision or thoughts on each candidate, as he wants to remain objective and impartial to his students.

“No comment, other than to say I hope we have leadership that can start to heal the country.’’

Mr. Hartman believes it to be our civil duty to participate in all of our democratic processes when speaking of the election.

“[I’m] not sure which election you’re talking about, but I always vote.  It is our civic duty,” Mr. Hartman said.

In terms of societal health in the United States Hartman thinks the deep political turmoil on top of an ongoing pandemic has set the stage for a grim future “We will be feeling the negative effects of Covid and the political turmoil for years to come,” Mr. Hartman said.

Along with Mr. Hartman, many MV students feel the effects of a crazy election year. Jacob Schrum, senior, has made it clear he has great disdain for how this election has coincided with this pandemic to give the country a harsh political landscape. “I don’t enjoy the sudden change of daily life along with the outcome of this election. I mean it really has been such a crazy year already I can only wish for things to go back to normal,” Schrum stated.

Gavin Banes, another MV senior, has a more lighthearted approach to how to digest this election. “Trumpie no win.’’