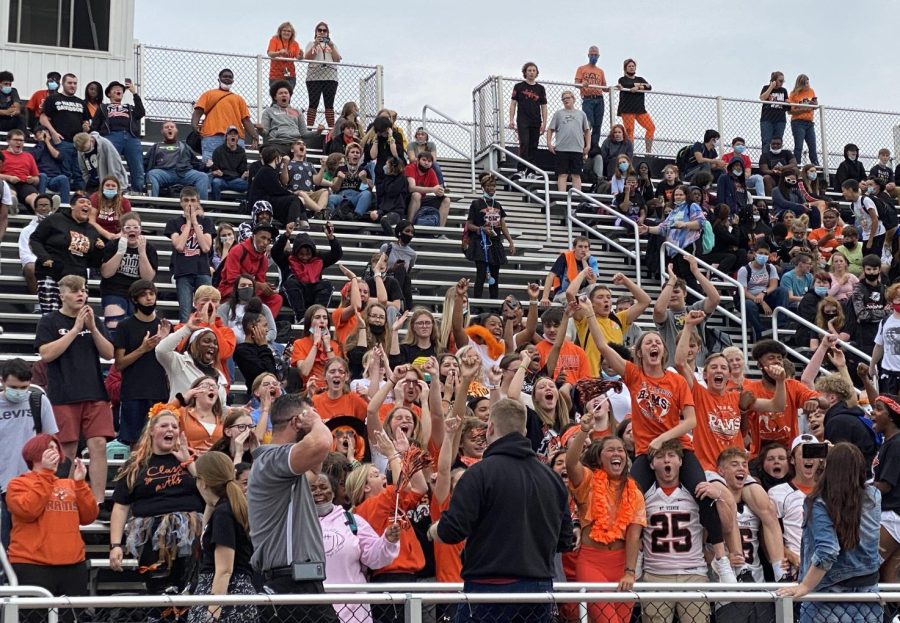 The class of '23 at the homecoming pep rally

My whole life I always knew the places I’ve been to …  the people, the culture, the language. I knew what was going on and how everything worked. Then it all changed. One and a half months ago I arrived here in Mount Vernon, Illinois.

I’m a German exchange student that always attended school in Germany. It has been my dream to come to the US since I was nine. My main reason to do this huge step in my life is the interest in seeing something new and getting a whole new perspective of independence.

Now actually being here and living this dream I’ve had for five years is absolutely overwhelming.

I had already visited America once, but I had  never been inside a high school. I heard stories and seen movies about it, but I’ve never been a part of it.

For most people who live in America, high school might be the most normal activity in the world. And there might be nothing exciting about it.

But for me, it’s like a completely different world that looks like the best amusement park I’ve ever attended.

Starting with classes themselves, I was shocked when I saw the multiple choices of classes I had. I could choose between more than 40 classes. If I would tell my friends in Germany they definitely wouldn’t believe me.

It might be weird to believe that, but until eleventh grade in Germany we barely have any choices about our schedule. The only choices I have are about additional classes, which focus on individuality of each student, like theater, singing, band, IT and more.

In Germany we have up to fifteen classes each week; some classes meet two or three times a week.

We have to learn every science subject, math, English, history, philosophy, and more. The whole schedule is made up by the school leaders.

We also don’t switch classes until eleventh grade, because we have permanent classes with twenty-five to thirty-five people with whom we have every subject. Mostly the teachers are coming to our classroom. Only for subjects that require tools would we leave our room.

Like in biology, philosophy and chemistry, and also for art class and music class.

But besides that we never switch our classroom.

That was one more reason why I was excited for my first school day. Switching my room to having every subject with new people sounded amazing to me. And it is.

I’m still so happy with the choices I’ve made including the classes I choose, the teachers I’ve got and the new people I’ve met that turned into my friends. I really felt welcome, because a lot of people came up to me and introduced themselves.

But that isn’t even all. The whole cafeteria situation is so, let me describe it as American.

Yes we do have a cafeteria in Germany as well, and we also get hot food and sit in one big room, but it is just the feeling around me knowing that here, it is like my personal American teen movie that makes simple daytime situations like this so special to me.

Also we are allowed to go out during the lunch break, which means there are a lot of small groups, but not one group spends their lunch together. And I like the atmosphere of that – talking to a lot of different people during lunch and not being for myself or just with two to three friends, which is what I am mostly in Germany.

All of that is better than I could have ever dreamed.  The best part for me is still the community itself. I like how all the different classes of students work together to build up school spirit. I love that we have blended classes with  every grade.

In Germany, we strictly separate the grades from each other. Nothing is mixed. And so we don’t have a lot of connections between the different ages.

I think it is hard to appreciate that unless you know otherwise.

What I mean is that here, everything is designed to make high school  for every student special and full of experience … football games every Friday night, any kind of games, pep rallies, dances and so much more.

That is the treatment I wanted to experience when I decided to come here. Having a concrete plan for Friday nights, counting the days until a dance, cheering as loud as I can in competitions against other schools

I think it’s crazy how much the school makes up and cares about the time in high school. Showing off that it isn’t only about studying, it is also about having fun.

And I wished in Germany I had more of that. We have some festivals, but only once or twice in the whole year. And that doesn’t force such a good community, like here in America with tons of out of school activities.

For the first time in my life, I attended my first football home game, and I was excited as a bouncy ball.

Guess what – back in Germany, we basically don’t have any games against other schools in any sports. Neither do we have dances, except prom, pep rallies or a mascot.

School in Germany is mostly focused on learning a lot in a short period of time. Our student representative tries to make up some group activities for the school community, but it is mostly just an idea which doesn’t come to life.

In Germany we don’t have dances except for prom, and it is very formal and not how you imagine your prom. In fact, students receive their diplomas during prom. But except that dance we don’t have any.

I really don’t have any idea why we don’t have other dances, but the whole dance thing is really American tradition and culture.

We participate in some sports competitions but normally you don’t know about these, and going there and watching them is impossible, because they are during the school day. But a football team or basketball team doesn’t exist at school in Germany.

And without these teams,  we don’t go out Friday night as a school community cheering for our team.

Without missing sports teams we also don’t have a mascot. For example my school is named after a famous explorer ‘Alexander von Humboldt’, but that depends from school to school.

Also there are multiple schools in Germany with his name. There is no type of mascot that represents our school. We only identify over the city or place where the school is placed, which is mostly added on the back of the school name. In my case that is Humboldt (explorer) Gymnasium (which means in Germany high school) Berlin-Tegel (the town and concrete part of the city where the school is located).

In that case, I can describe our German school system as outdated and more like the 19th century because of all the different classes we have to participate, even if we don’t like the subject. The amount of the classes per week and the big focus of success in everything makes it a challenge.

All that pressure causes a lot of stress with the students. We do have some cases of depression because of school. And in my opinion students should not struggle with that in their young age, and these reasons make me think of the strict 19th century type of school. Not really modern and individual.

There will be people that won’t agree with me, but for an American fan-girl like me, it fits really well.

So I’m looking forward to every game, every dance and everything that is made up for us students, happily.

The school spirit is so much different than I’m used to. Don’t understand me wrong, though – German school isn’t bad, it is just not like this. That is incredible.

Being able to see everything about American high school and being a part  of it, it is a feeling I can’t describe.

I’m starting to get a bit jealous of something I can’t have for a long period of time, like a full four-year experience. But I think I wouldn’t be able to appreciate every day like that, if it would have been given to me from the beginning.  Knowing that this life is only given to me for five months makes me even more grateful.

High school in America and everything around it, going out with friends and living a typical American teenage life is an experience that I will never forget and I’ll grow on.

I believe that my time at MV will be the most important part of growing up in my teenage years.