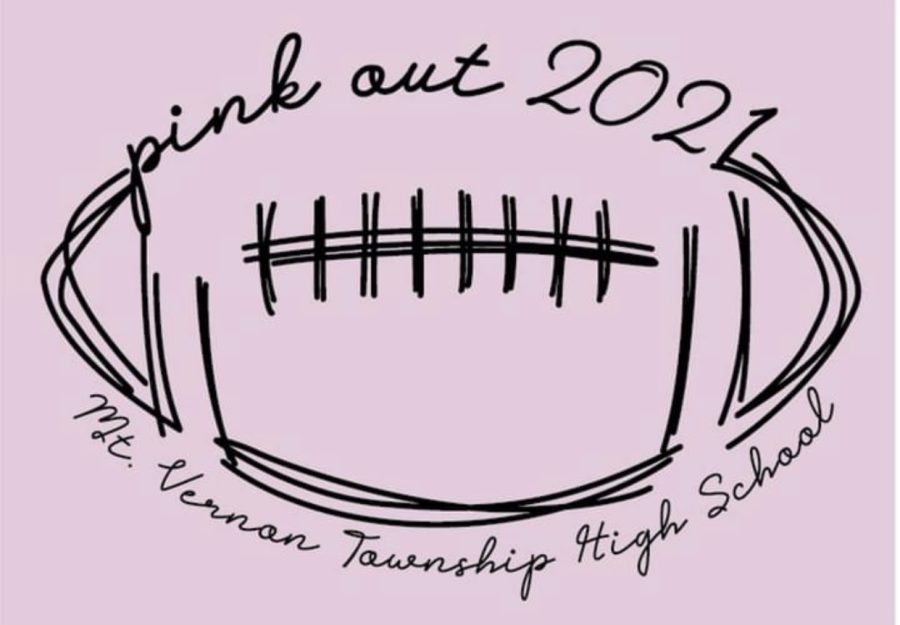 From t-shirts to specially-lettered jerseys, pink could be seen everywhere as the MV FBLA hosted its 9th annual Pinkout Game on September 24 in Hunt Stadium.

Many people look forward to the Pinkout football game each year. Bouncing back from the COVID-impacted 2020-21, when the Pinkout Game wasn’t held, FBLA was able to raise thousands of dollars for the Susan G. Komen Foundation.

With a record-breaking thirty-one sponsors on the back of this one of a kind t-shirt, FBLA easily sold around 600 shirts, almost doubling sales from 2020.

Quite a few people played major roles in the planning of the 9th annual Pinkout Game. FBLA Adviser Ms. Julie Hayes expressed “ I am fortunate to be an adviser for FBLA along with Mrs. Gina Williamson. Our role is to organize and supervise all activities that make the event a success before, during, and after the game.”

Along with  advisers, the 2021-2022 FBLA Officer team is responsible for planning the annual event.

Jude Erasmus, ‘23, stated “My favorite part of this year’s Pinkout game was engaging with all of the students through HOSA’s booth and watching the spectacular events FBLA put together.”

Erasmus is part of the FBLA officer team, and he also serves as president of the HOSA organization. He delivered an informational speech at half time spreading awareness to the cause.

The Duck Drop was hosted before the game began.  For the Drop, at the beginning of the third quarter FBLA members handed out pink powder cups and asked the Khaos Kage off to throw the powder into the stands after a short countdown.

Kenzie Bach, ‘25, expressed “My favorite part of the game was chilling with my friends and doing the powder toss.  It felt great to connect with everyone over such a deserving cause.  I also loved the Jersey Ceremony and I felt the families got the recognition they deserved.”

The Jersey Ceremony is praised by many and is considered to be one of the most heart-touching parts of the Pinkout game. This ceremony is held after the game. The players with sponsored jerseys hand off the sweaty and stained jerseys to the survivors and families who have been chosen as names on the backs of them.

Ms. Hayes stated “I look forward to the Jersey Ceremony after the game. I love reaching out to those that have been impacted with cancer and learning about their journey or their loved one’s journey to write the script for the ceremony. When I speak with these people, I am reminded of ‘the why’ of this game.”

“When the football players take off their jerseys that they have worn throughout the game in which the jerseys become sweaty, dirty, or torn, and hand them to the recipient during the ceremony, I am reminded that cancer is not pretty, it is hard, it is tough, and it takes a community to support these fighters, Ms. Hayes stated.

“I am proud of our FBLA chapter that provides the vehicle to collect funds to help find a cure,” Ms. Hayes added.

Many cheerleaders, including Kaitlyn Blachly, ‘23, said “ The one thing I look forward to is the packed stands.”

The stands are so full, and by the end of the game, whether the team has won or lost, the Pinkout Game courage and hope has been given to the players and cheerleaders.

Out of  five people interviewed, 60% state that they have had a loved one or friend affected by cancer.

Ms. Hayes expressed the reason the whole game tradition started. “The first MVTHS Pinkout football game originated 9 years ago when our FBLA President at that time, Tyler Knutson, asked if we could do some type of fundraiser for  breast cancer awareness and raise funds towards a cure since his mother had been diagnosed with breast cancer.”

“From that desire to help, the MVTHS Pinkout Football game was created and tens of thousands of dollars have been donated toward finding a cure for breast cancer,” Ms. Hayes said.

Many people continue to support this cause. “I truly hope that one day we will not need to have a Pinkout Game because a cure has been found,” Ms. Hayes added.