Locked up in the Kage: The story of MV’s student section 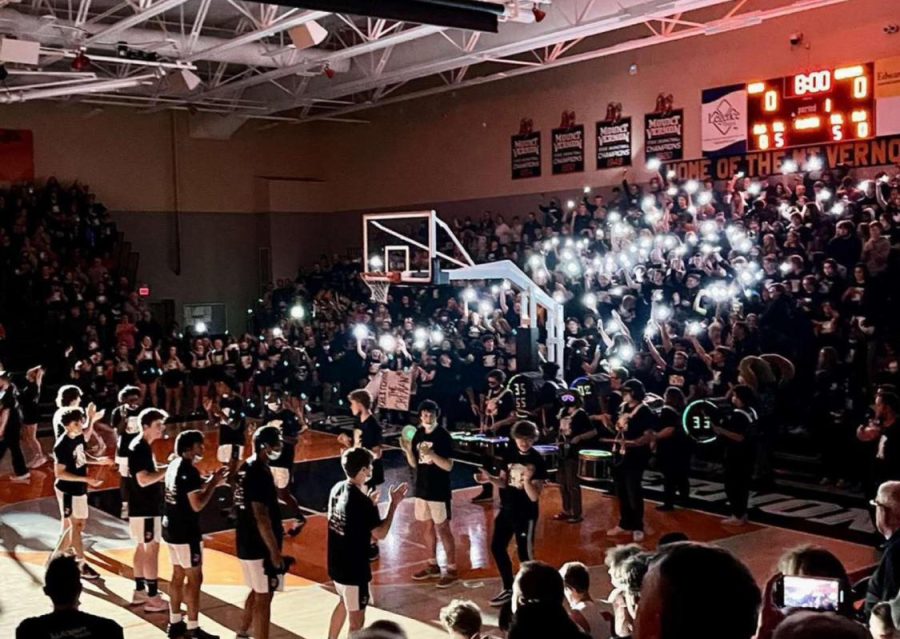 Shining Bright...The Khaos Kage lights up as students turn flashlights on for the starting lineups of the annual Blackout Game against Centralia on February 25

Mount Vernon Township High School has always been a place of pride and tradition. From spirit weeks and dances, to attending sporting events, MV have enjoyed so many special activities throughout the years. Sadly, COVID-19 brought an abrupt halt to these social events and activities. Just up until February, 2022, we were not allowed to have our famed indoor assemblies, which many members of the Class of ‘22 were extremely excited to participate in once again, as they had not attended one since their first semester of sophomore year.

Nathan Wilkie, ‘22, and FBLA president, commented, “I think it’s good to be back in person and be able to experience school related events.”

However, the one tradition that had ceased, then made a staggering comeback, is the Khaos Kage.

The Khaos Kage is not just an ordinary student section at MV-it is a way of life. Every home basketball game, the members come ready to cheer on the Rams, participate in the theme for the night, and just have a good time.

The Kage has taken many forms over the years, with the original being the Chaos Corner in the original Changnon Gymnasium, where select members of the student body would plant themselves in the corner of the floor bleachers by the locker room entrance and boo the opposing team the second they came out of the locker room.

Then around 2004-05, the students shifted into the actual Kage, where the students and band were placed on the stage at Old Changnon and held back from the gym floor by a full net enclosure. In 2016-17, when the high school moved across town to the new campus, it evolved into the current manifestation, which is a section of bleacher seats that are stationed directly behind the south basket and funnel all the way up to the top row under one of the scoreboards.

The Kage has always been a positive outlet that gives students at MV an opportunity to support their friends and classmates in an energetic atmosphere and be a part of the community. Many Kage members look forward to the theme nights, including Cowboy Night, Toga Night, Jersey Night, and the like. Diedrich Smith, ‘25, expressed, “My favorite theme was [definitely] Blackout Night or Beach Night.”

With the Kage comes the Rams Pep Band and the drumline, who perform at every home game during the basketball season. MV has had the privilege of having a band play the National Anthem before games, in addition to the school Loyalty song and various other tracks. As a bonus, the drumline has a special routine that they perform during the starting lineups for the Rams. This routine has amassed an almost cult-like following for the town’s basketball spectators, and is thoroughly enjoyed by all. Videos of the routine have been posted on Youtube, and these videos have gathered thousands of views, with the highest total being four thousand views.

Band director  David Mateyka said, “My experience as band director here at the high school has been nothing but great fun at basketball games. Performing with the pep band at basketball games is less of a ‘have to do’ and more of a ‘get to do’ for us band members…I have loved having the awesome crowds at the games to feed off that energy and really make the gym an electrifying place to be on a game day afternoon/evening”.

Generally, the Kage has one or a few people that “lead”, which involves producing the theme nights and starting the chants.

Roman Harrison, leader of the Kage during the 2021-22 school year, had a few chants he particularly enjoyed. “I’d have to go with ‘O you suck’ or ‘Number blank is ugly’ because they always got the best reaction. That was always the goal-to get a reaction. That showed that they were thinking about us,” Harrison recalled. Former leader, Chapel Davis, Class of ‘20, stated, “I loved leading the Kage. I loved getting amped up and screaming with the whole school…seriously was always a good time.”

During the 2021-22 school year, the Kage expanded its reach not just to men’s basketball, which it has almost been exclusively reserved for, but to volleyball and girl’s basketball as well. In past years, these sports did not usually garner as much student support as others.

This year, however, was a turning point. While the total attendance might have not been the same as a Friday night in January, the energy and support was the same.

This could have possibly been an aftereffect of COVID, as many students did not get to attend many social events the past two years, and they were just happy to support their school, classmates and friends.

Ashlyn Childers, 22’, member of the girl’s basketball team stated, “It was very nice. It got [the team] really hype, and it made us more excited because we knew our friends were there watching us.”

Leigha Moore, ‘23, member of the volleyball team, expressed, “It definitely helped more, [and] it was very encouraging. [It is] nice to have a crowd that is not just parents. Even at away games, when the opposing team has their own student section, the game is more fun. Even when we lost, we still appreciated them,” Moore stated.

While sometimes the Khaos Kage can ruffle some feathers and inspire some very harshly worded Facebook posts from parents who are apparently leading experts on the IHSA rulebook, it still is a great tradition, along with being a place for students to have fun. It is an exceptional example of Ram pride, and is great to have back after two years. Lucas Martin, ‘22, summed it up best, stating, “Go Rams!”