Seniors speak on basketball careers after finishing their final seasons 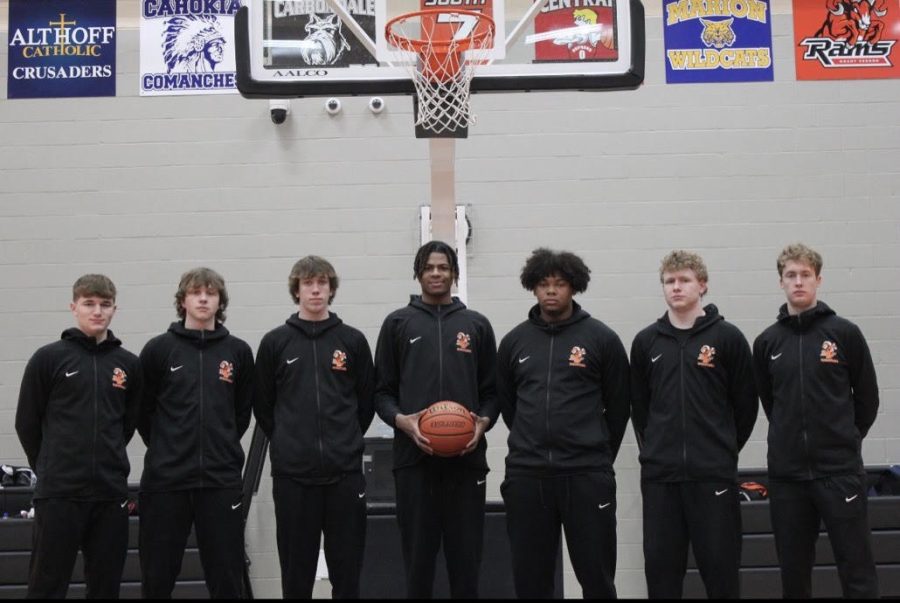 With the 2021-22 school year coming to an end, MV seniors are wrapping up their final seasons with Rams athletics. On the basketball side of things, the Rams had a total of seven seniors to bid farewell to after this season. The Varsity Rams ended the season with 22 wins, finishing third in the conference. All of the Ram seniors had l played large roles in Ram’s success.

Let’s start off with N.J. Benson. Benson has been involved with the basketball program since he was a freshman.

“I’ve been on the MVTHS team for all four of my years and even when I didn’t play in my freshman year I stayed with it and it worked out for me,” affirmed Benson.

Benson became a Rams star this season, as he was awarded the All-Conference MVP and competed in the Lions Club All-Star Game. He was also named 2nd team AP All-State and 1st team IBCA All-State for 3A.

Next season, N.J. will play for the Missouri State Bears, where he committed on November 10, 2021.

“It was really fun, I really enjoyed being able to play with my boys for my last year in highschool,” asserted Benson.

Now let’s move on to guard Cooper Hemby. Cooper has been involved with the Rams basketball program since he was a freshman, and said some of his favorite moments have been “Playing during the Covid season, practicing at the city park and competing in tournaments in St. Louis.” Hemby is also involved in the Track and Field program for the Rams.

“My last year as a Ram felt great. It always sucks coming to an end, but it was a season I will never forget,” stated Hemby.

Along with Benson, Cooper competed in the Lions Club All-Star game at Rend Lake College. Cooper was awarded the Assists and Defensive Rams Basketball Banquet award, and received his first offer from Elgin Community College on March 14.

Dashaunsae King is next up, and, like a lot of these players, basketball is not the only sport he is involved in. Along with Cooper and Landon, King competes on the Rams Track and Field team and participates in shotput and discus for the Rams. King also plays for the Rams football team, where he was awarded a spot on the All-South Defensive First Team. Dashaunsae is committed to Olivet Nazarene University, where he will play football next season.

“My last year as a ram was exciting, but kind of sad. It was exciting because we got to enjoy the season and have fun, but it was sad because it’s the last season playing in the gym and having all of our fans support us,” King described.

Dashaunsae has been playing basketball for the Rams since he was a freshman and said it has been “One of the best experiences of my life.” King started at center for the Rams in his final season.

“We appreciate everyone in the stands and everyone that supports us in any way. It is a great feeling to know people believe in us and want us to do good,” added King.

Like most of these other players, Kujawa has been involved with the Rams basketball program since he was a freshman. “Enjoy your years at the high school. They were some of the best years of my life and they went the fastest,” stated Kujawa.

Kujawa started for the Rams at small forward this season. “It went by quick,” expressed Kujawa. “Even when I only went for half of the week for almost all of last year, this has still felt like the fastest year.”

Kujawa is also involved in the baseball program for the Rams. Kujawa recently committed to Lewis and Clark Community College where he will play baseball for the Trailblazers next season.

Jackson Swan has been involved with the Rams basketball program for all four of his years at MV. “Definitely was a roller coaster of emotions but I had a lot of good moments and had a great year,” is how Swan described his senior basketball season.

Swan started at Shooting Guard for the Rams this season and did pretty well. Swan was also awarded the Defensive Rams Basketball Banquet award. “I’m really proud of our team and the way we played,” expressed Swan. Next school year,  Swan will be attending RLC and will major in biological sciences.

Brock Holloway came off the bench for the Rams this season, and he was also awarded the McClure Rams Basketball Banquet award.

“I was very grateful that we were able to have a normal basketball season this year as opposed to the 2020-21 season. It was awesome to have the fans and the Kage back,” expressed Holloway

Along with Kujawa, Holloway also plays baseball for the Rams, and starts at Third Baseman, he also spends some time on the mound as a RHP.

“It felt amazing I was glad that my last year as a Ram was finally back to normal again after quarantine for the last 2 years I just really tried to soak everything in,” stated Landon Simpson.

Landon Simpson also came off the bench for the Rams this season, and along with Brock, Simpson was awarded the McClure Rams Basketball Banquet award.

Simpson is another case where he plays many sports for the Rams. Along with Deshaunsae and Cooper, Landon is involved in the Track and Field program for the Rams. Simpson is also involved with the Rams football program, where he started at Kicker this past season and was awarded an All-Conference spot for that position. Along with those sports, Simpson competes on the Rams soccer team. Next school year Simpson plans to attend to get his degree in exercise science.

“Don’t take high school for granted it’ll be over before you know it,” stated Simpson.

“Thank you to our seniors. It has been quite a journey the past two years. These guys stuck together through uncertainty, success, adversity, and led our team to a 22 win season. Best wishes in all future plans. Good things ahead for these young men,” stated Rams Head Coach Tim Holloway, via the basketball team’s Twitter account.